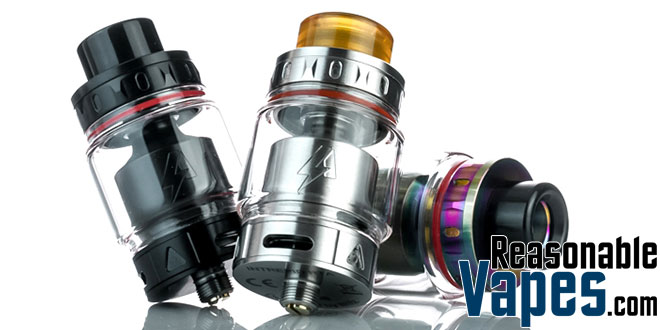 There’s definitely no shortage of great rebuildable tank atomizers these days, which brings me to this Blitz Enterprises Intrepid RTA. First of all this one is for the direct lung hit vaper as it has plenty of open airflow. When you screw off the build deck on this tank you’ll be greeted with a postless design that has connection terminals large enough to fit most builds. Furthermore there is a ceramic block airflow controller in the middle that accommodates dual coil builds only. However I have great news for single coilers because there’s a second ceramic block included in the box for single coil builds.

In addition to the amazing build deck you get with this Blitz Enterprises Intrepid RTA, there’s also some other goodies included. First you’re getting an extra bulb glass piece which increases your juice capacity by a pretty decent amount. There’s also 3 drip tips included that are made from 3 different materials with 3 different bore widths, which is a nice added touch. In conclusion this Blitz Enterprises Intrepid RTA is a great tank worth a lot more than the tiny asking price!

Here’s a review of the Intrepid RTA by GrimmGreen: