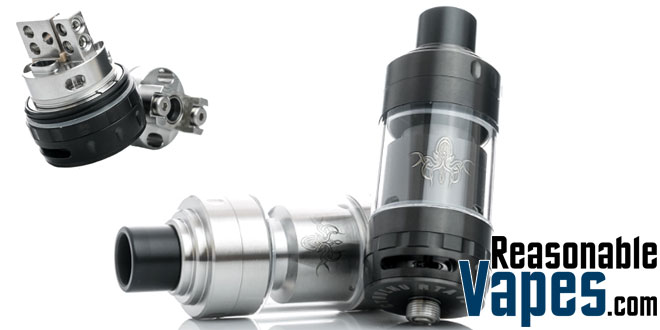 The Cthulhu V3 RTA is a substantial upgrade over the last version bringing us several cool new features to an already great tank. This rebuildable tank atomizer is more like 2 tanks in one because it comes with 2 build decks in the box. 1 deck is for single coils and the other is for dual coils. You can swap out each deck with ease due to the clever way this Cthulhu V3 RTA is designed. The single coil deck is much like a kayfun styled deck except exploded in size. The dual coil deck is like a velocity style but a little different, however it’s still just as easy to build on as ever. Both are 19.8mm in diameter so there’s plenty of room to work with, and they have a ton of airflow. So both decks can accommodate pretty much any build you want to put in there.

Other than the fact that you can swap out the build deck on this Cthulhu V3 RTA, which is an awesome feature. It also has other things we expect in our tanks nowadays like a top fill method along with a juice flow control. The airflow control is easily adjusted using the ring on the bottom, plus it’s pretty smooth which is great. The tank is made from 304 stainless steel and glass, plus the screws are customized hex screws that should never strip on you. This Cthulhu V3 RTA is the best one in the series to date and more than worth picking up even if you have one of the last ones!

Here’s a review of the Cthulhu V3 RTA by Mike Vapes: