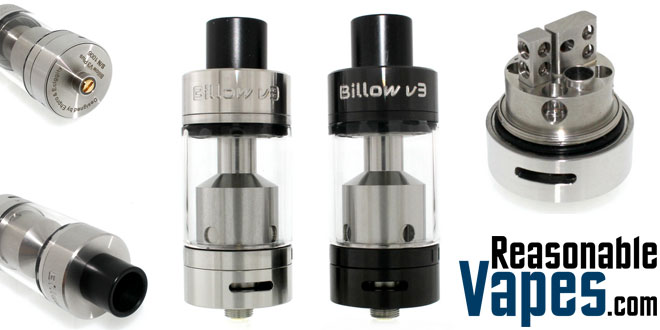 The Billow V3 Plus RTA is essentially a larger version of the Billow V3 that brings you more eliquid capacity, a larger build deck, and a few other goodies. It has a top fill method that works just like the Crius where you just pull up on the top, and dump your juice into the large slot. While the Billow V3 Plus RTA does not have a top airflow like other similar 25mm rebuildable tank atomizers, that doesn’t really matter considering the indirect airflow you get between the 2 posts. This indirect airflow comes out from behind the coils and will produce better flavor anyway which is a huge plus in my books. Plus you have the usual direct airflow that hits the coils from the bottom too.

The build deck on this Billow V3 Plus RTA uses the same velocity style posts, and the deck has large wicking channels that make it super easy to wick. All you have to do is tuck your cotton in the top of the holes and you’re good to go. If you ever need to re-wick or put a different build on there’s no need to drain out your tank as you can access the build deck with a full tank of juice. The wide bore drip tip is comfortable and the airflow is super smooth, making this Billow V3 Plus RTA one of the best 25mm tanks you can get!

Here’s a review of the Billow V3 Plus RTA by RiP Trippers: