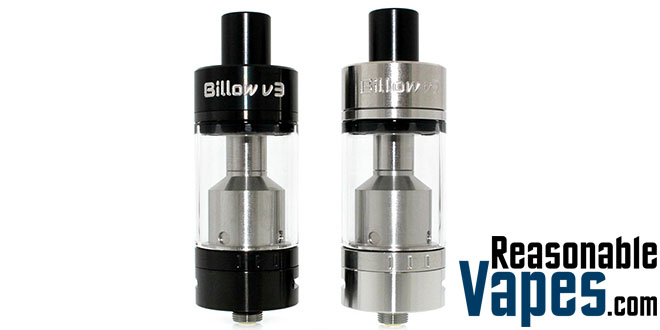 There are tons of rebuildable tank atomizers coming out as of late, and this Billow V3 RTA by EhPro and Eciggity is another great one to add to the list. Like most this one has a Velocity style build deck with large post holes to accommodate almost anything you can throw at it. There are 2 very large air holes directly underneath the coils in the usual spots with a raised edge to help prevent leaking, and there is another another air hole on the positive block that hits the back of the coils as well. So this Billow V3 has plenty of airflow and it’s a lot like we’ve seen in the Gemini RTA.

You’ll also find that this Ehpro Billow V3 RTA has large juice channels that are easy to wick, and there is no wicking ring on this one which some folks found annoying. It has a generous eliquid capacity but when you do need to top up you’ll find it’s super easy to do so with it’s top filling design. Also there’s a juice flow control on it too, and all these great features makes the Ehpro Billow V3 RTA a great choice in a sea of rebuildable tanks!


Show Me The Deal

Here’s a review of the Billow V3 RTA by VapingwithTwisted420: