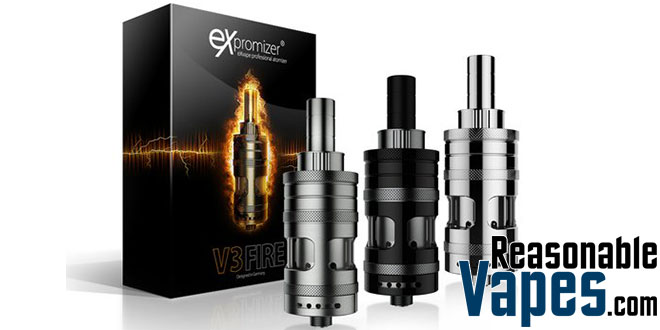 Here we have the eXvape eXpromizer V3 Fire RTA and this fully featured atomizer comes with everything you’d expect in a tank today. First of all this one may just be the best version so far to date. That’s because of how easy this one is to work with, as well as being super easy to build on. It’s a single coil rebuildable tank that has a build deck that’s very similar to the Kayfun. As a result you won’t have any issues building on it, plus the flavor production is top notch as well.

In addition this eXvape eXpromizer V3 Fire RTA has a top fill system that doesn’t push juice into the chamber when you close it. Furthermore there’s a juice flow control system that is fully adjustable simply by turning the top of the atomizer. The airflow control has a ton of options on this one, plus there’s even a hole small enough for mouth to lung vapers. However it’s definitely designed for direct lung vaping as the air-hole under the coil is relatively large. Simply put, this eXvape eXpromizer V3 Fire RTA is a great buy at this price point and feels like it should cost a lot more than it actually does!

Here’s a review of the eXvape eXpromizer V3 Fire RTA by Todds Reviews: