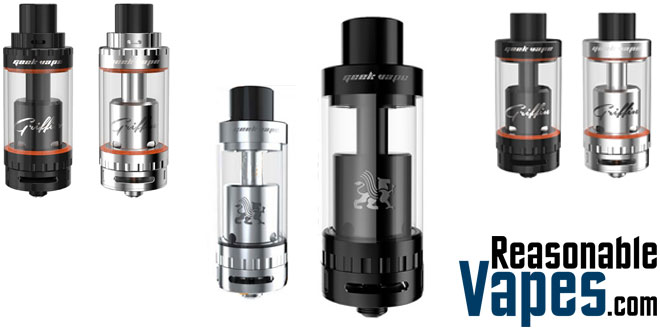 The original GeekVape Griffin RTA has to be one of the most in demand rebuildable tank atomizers that have come out in quite some time, and for good reasons. First of all it has a velocity style deck that’s super easy to build on. Plus it’s very roomy so you can fit fused clapton coils in there without much fuss at all. So hopefully we see more devices making use of this awesome style build deck. Below you’ll find 3 versions of the original Griffin RTA, the 22mm, the 25mm, and also another 25mm option including top airflow for the vaper who prefers maximum airflow.

All versions of the GeekVape Griffin RTA’s have a top fill design and a juice flow control system that can easily be closed off by turning the tank. While the standard version only has a 3.5ml ejuice capacity, the Griffin 25 RTA version can hold up to 6.2ml of eliquid and has a much larger build deck – but you’re getting a fatter tank at 25mm rather than the standard 22mm. All in all the GeekVape Griffin RTA series of tanks is a fantastic choice with options available to suit most vaping styles!

Here’s a review of the GeekVape Griffin RTA by RiP Trippers: