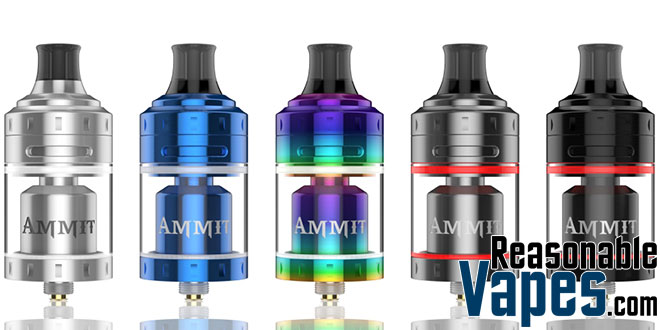 Here we have the GeekVape Ammit MTL RTA, and as far as I know this is the first mouth-to-lung tank from these guys. First of all this has the popular top down airflow system which delivers a bottom airflow without any leaking. It’s also know to improve the flavor a bit too. Furthermore I don’t think I’ve seen this type of airflow on a mouth-to-lung tank so far, so this is a nice change of pace.

In addition this GeekVape Ammit MTL RTA is a pretty large atomizer, and as a result it holds a pretty decent amount of juice. It has a single coil build deck with a 2 post design which is very easy to build on like most single coil devices. Plus the wicking channels are easy to work with, and won’t give you any issues when you vape the high VG liquids of today. So if you’re looking for a new airflow design for a mouth-to-lung tank that holds plenty of juice, then be sure to grab yourself an MTL RTA from GeekVape!