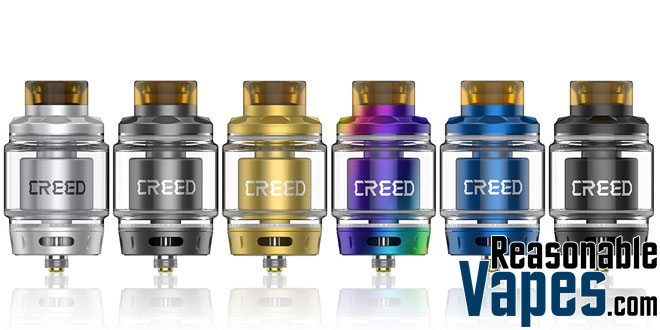 Here we have what just may be one of the most versatile tanks on the market so far, the GeekVape Creed RTA. First and foremost, this rebuildable tank atomizer puts the main focus on the airflow design. It comes with 3 interchangeable airflow rings that go around the deck. First you have your bottom kennedy style airflow. However the rings bring you optional side airflow as well. The first one gives you no side airflow at all, the second ring has vertical cyclops slots, and the third is a honeycomb airflow design.

In addition this GeekVape Creed RTA has a 2 post build deck with very large terminal holes that can accommodate pretty much any build. Furthermore it supports both single and dual coil builds thanks to the included blocker which blocks off one side of the build deck. The wicking channels are very large, which make it a breeze to wick without getting any gross dry hits. The bottom line is that if you’re an airflow hog, then you’re going to love this GeekVape Creed RTA!

Here’s a review of the GeekVape Creed RTA by Mike Vapes: