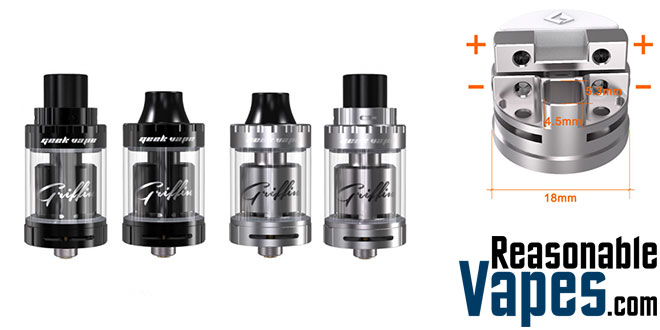 The GeekVape Griffin 25 Mini RTA appears to be just a smaller version of the Griffin 25 on the outside, but there’s actually some really neat improvements hidden within. While it still sort of has a velocity style deck, they’ve actually improved it a lot. It’ll take up less room in the tank while still giving you the same great performance. Instead of the usual positive and a negative posts, the positive is now the top 2 holes and the negative are the bottom holes. The airflow holes is also raised up quite a bit so you shouldn’t get any leaking with this Griffin 25 Mini RTA too. Look at the pic above to see what I mean. There’s one big benefit to this shorter deck though, it’s going to produce much more flavor!

You’re getting a pretty decent juice capacity with this GeekVape Griffin 25 Mini considering how short this is. It comes with 2 different drip tips and one of them is super comfortable on the lips because of the way it’s shaped. If you’re a single coiler don’t fret, as usual GeekVape has included an adapter so you can close off one side to run a single coil with ease. It’s made of ceramic so you don’t have to worry about it melting or messing up your flavor. In my opinion this Griffin 25 Mini RTA by GeekVape is a better option than it’s bigger brother for the flavor chasers!

Here’s a review of the Griffin 25 Mini RTA by GrimmGreen: