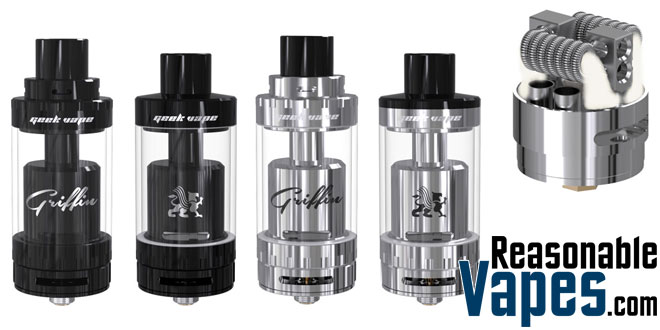 I don’t know how many times GeekVape can keep updating this same tanks, but now we have the Griffin 25 Plus RTA and this looks like the best one yet. This time around they are giving us both of the top caps in the box so you can switch between top airflow or not on the fly. While everything else looks practically the same on the outside, you’ll notice that the juice channels are a bit different. This is because GeekVape has given the build deck a bit of an overhaul in the new Griffin 25 Plus RTA.

First of all, the build deck still sports the same 2 post velocity style so it’s still easy to coil. It’s very roomy, but the other changes make this a heck of a lot easier to wick too. You wick this Griffin 25 Plus just like you would with a dripper by placing you’re wicks on the floor of the deck. Another notable change is that airflow. We get the perfect airflow design of the Kennedy in an rebuildable tank atomizer that performs like a dripper, which is a pretty sweet deal.

Other than those awesome changes, this GeekVape Griffin 25 Plus RTA holds a good amount of ejuice at 5 milliliters. The 510 positive post is gold plated for maximum conductivity which is always great. You’ll even find a single coil adapter in the box for the vaper who prefers to rock the single coil builds. The bottom line is that this Griffin 25 Plus RTA is one heck of an upgrade to a tank that was already pretty awesome to begin with!

Here’s a review of the GeekVape Griffin 25 Plus RTA by RiP Trippers: