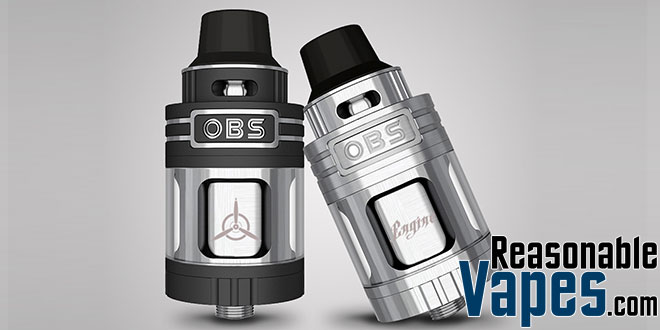 The OBS Engine RTA is a great one for the vaper who likes the top down airflow style system. These guys do it well as the air slots inside the chamber come out directly on top of the coils. You can even raise the coils up closer to them when you’re building to maximize your flavor production. While building this you wont have any issues as it uses a 2 post velocity styled build deck. The post holes are a pretty decent size so you’ll get your wires in there without any fuss. The wicking system for this OBS Engine RTA is much like what we’ve seen in the aromamizer series except the juice holes are much larger.

You get a pretty nice amount of juice in this OBS Engine RTA as it holds 5.2 milliliters. There’s a top fill system as there is on every other tank, however this one is located on the top side of the tank. The top airflow control is located just below the drip tip above the fill port. An added benefit to the top airflow system is the fact that it helps keep your drip tip cool, so you won’t burn your lips on it which is great. There’s a wide bore delrin drip tip included to so that won’t be any problem with this OBS Engine RTA. It’s definitely worth grabbing one at such a low price!

Here’s a review of the OBS Engine RTA by FlavaChaser: