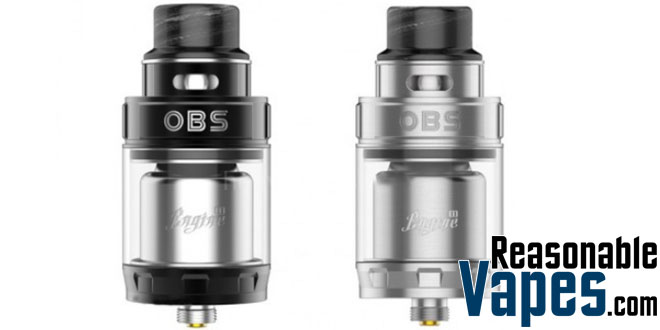 Here we have the OBS Engine V2 RTA, which is also known as the Engine II, and this is a nice upgrade over the previous version. First of all this one has a pretty neat 360 degree top adjustable airflow. What’s great about the top airflow design, other than flavor, is the fact that it helps to prevent leaking. Inside the build deck you’ll find a unique 2 post deck that’s pretty easy to build on. Furthermore the wicking channels are a nice size too so you won’t have many issues with those thicker viscosity juices.

In addition this OBS Engine V2 RTA comes packed with other cool features, like their patented top-side filling system that works well. It’s construction out of a high grade 304 stainless steel, and holds a generous amount of juice as well. While it is a bit large coming in at 26mm overall diameter, it’ll still look great on most box mods out there. As a result this OBS Engine II RTA is a great upgrade over the previous model. Heck it’s a great choice even if you’ve never tried the old one!