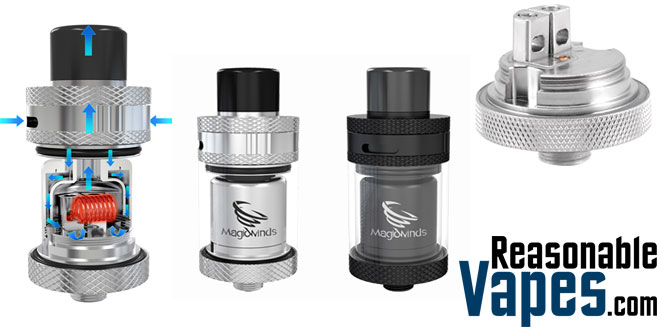 While at first glance this Oumier Magic Winds RTA appears to be a lot like other tanks that we’ve seen recently, but it actually puts a unique spin on things. First of all it does have the top down airflow that is becoming pretty popular lately. However where this one differs is the fact that the air channels go all the way down to hit the coil on the side. Additionally this Oumier Magic Winds RTA has a dual post build deck, but it’s meant for those single coil builds. Furthermore the juice channels are pretty darn big, so you can bet it’ll handle those high viscosity juices with ease.

The best part about getting that super reduced chamber is that it’s known to increase the flavor. But when you combine that with the single coil inside means this Oumier Magic Winds RTA is going to produce truly amazing flavor. Because of that the cloud chasers will probably want to avoid this one as it’s meant for the flavor chasers. However with the combination of the right build and juice it definitely won’t be any slouch in the vapor department that’s for sure.