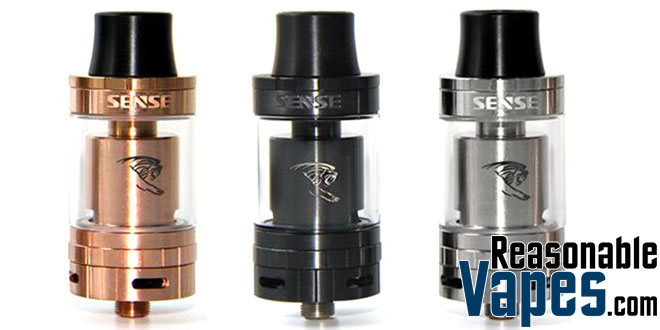 The Sense Herakles Mini RTA is basically just a smaller version of the RTA-2 which came out not too long ago. This tank holds 3ml of eliquid which is a pretty decent amount when you look at how small this thing is. It’s nearly 25mm in total diameter so it’ll look great on your box mods. Personally when I see a short tank I think better flavor, and that’s exactly what you’ll get with this Sense Herakles Mini RTA. Another thing I love about shorter tanks is simply the fact that they don’t look as tall on your device. That’s just a personal preference but I prefer the stealthier look.

You’re getting the same 2 post build deck on this Herakles Mini RTA as you get with the RTA-2 from Sense. It’s easy to build on and it has plenty of airflow to handle any of those crazy builds you want to throw at it. The juice channels are very large, in fact I would call them juice slots by the size of them. So not only is this tank a breeze to build on, it’s also a piece of cake to wick too. All you have to do is tuck you’re wicks into the large slots with very little effort. If you’re a flavor chaser who loves to blow clouds, then I think this Herakles Mini RTA by Sense is going to meet your needs just perfectly!