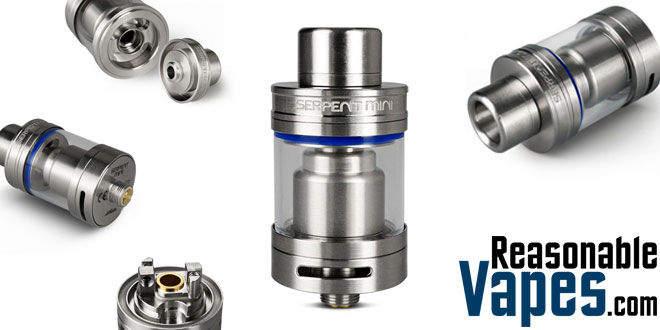 The Serpent Mini RTA is a tiny new rebuildable tank atomizer from Wotofo that’s designed exclusively for single coil builds. While it does have plenty of airflow to handle those low sub-ohm builds, you can actually close it down enough to do a nice mouth-to-lung hit if that’s more your speed. It has a pretty good eliquid capacity considering how tiny this thing is, and the standard 22mm diameter means it’ll look great on pretty much any mod you own.

The slots to trap your wire are a nice size so you shouldn’t have any issues getting a clapton or something in this Serpent Mini RTA. Plus there’s a PEEK insulator on the deck so it won’t melt with those hotter builds too. If you’re the type of vaper that prefers the higher VG eliquids then you’ll be as pleased as I was to see those huge juice channels, so wicking shouldn’t be a problem. It even has a top fill method which is a must on the Serpent Mini RTA due to it’s small size, however that small size usually means better flavor!

Here’s a review of the Serpent Mini RTA by Richard Ng: