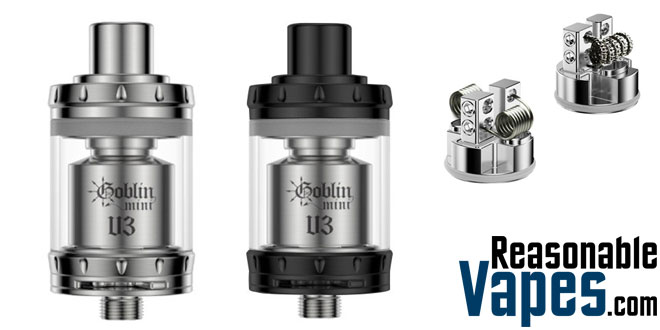 The Goblin Mini V3 RTA is the newest version of a very popular flavor tank and to be honest, I don’t know what ever happened to the second version. All joking aside, if you’re coming from the original Goblin Mini then you’ll get a plethora of improvements that make this the best choice for a flavor tank. This one uses a standard 510 drip tip so that you can rock your own instead of being forced to use the included one. There’s a top fill method too so you don’t have to fuss about with that annoying little screw when you need to fill up the tank as well.

The biggest changes to this version is on the build deck. The Goblin Mini V3 gets a Velocity styled build deck like pretty much every thing else. However, here’s where it’s different than the others. The decks are actually interchangeable. Plus you even get another one that’s designed solely for single coils builds. This is an awesome feature that allows you to change out the deck on the fly. As a result of this we also finally have the ability to do so while juice is still in the tank, which is great. This Goblin Mini V3 RTA sticks to it’s original 22mm size to look top notch on all your mods. So if you’re on the hunt for a flavor tank this is the one to get!

Here’s a review of the Goblin Mini V3 RTA by Vaping With Vic: