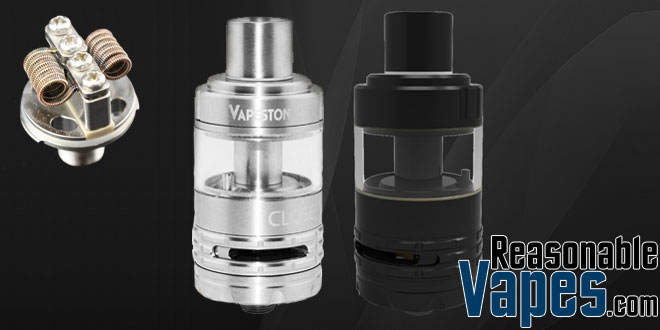 The Vapeston Cloudnus RDTA is a lot like the Aromamizer Supreme in the way that it’s designed. However this one has some differences that some vapers might like better, but most of all the lower price tag. You’ll find that this Vapeston Cloudnus RDTA has a top fill method, and a tank that holds 4ml of ejuice which isn’t too bad. It has adjustable airflow control with 2 rather large slots on both sides that hit your coils directly, much like a dripper. I would say that this has even more airflow than the supreme by the looks of it.

The build deck on this Vapeston Cloudnus RDTA is also removable, so I would say that we’ll probably see more options in the future. The difference here though is that they are using a very similar type of build deck as the Goon RDA, which will be forever dubbed as the “goon style deck”. The advantage to the type of build deck is that it’s super easy to get any build you can imagine in there. Also the wicking holes are some of the largest I’ve seen on this type of atomizer. So I’m sure wicking wont be an issue with those crazy builds too. This Vapeston Cloudnus RDTA is definitely one of the better choices at this price point. Maybe even beating out the more expensive ones too!

Here’s a review of the Vapeston Cloudnus RDTA and a build tutorial by Vaping With Vic: