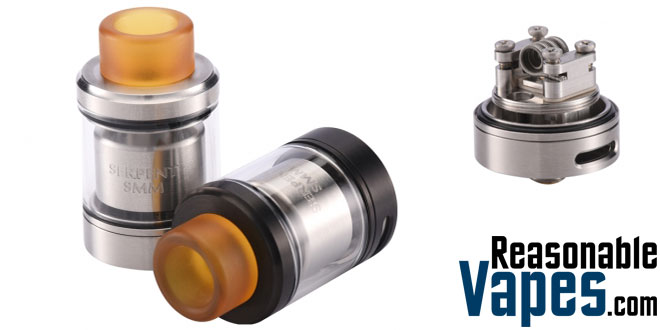 The Wotofo Serpent SMM RTA is yet another device that Matt from Suck My Mod had a hand in designing, and I think this may be the best one yet. First of all this is a single coil rebuildable tank atomizer that’s designed mainly for flavor. But that doesn’t mean it can’t chuck clouds with the best of them. The deck itself is very easy to build on and you have to bend and twist your wire to get it in there, which is great. Additionally it’s pretty darn simple to wick as well.

While it’s hard to tell by looking at the Wotofo Serpent SMM RTA, it actually holds about 4ml of ejuice which isn’t too bad. Plus there’s a TPD compliant version for our vaping friends in the UK who would like to grab one too. Furthermore the airflow design on this Wotofo Serpent SMM RTA is pretty neat. It comes up through the posts and hits your coils on both sides delivering amazing flavor in your mouth hole. I can’t recommend grabbing one of these highly enough!

Here’s a review of the Wotofo Serpent SMM RTA by Heathen:

Here’s another video walk through by the co-creator Suck My Mod: